She saw him in her dream. 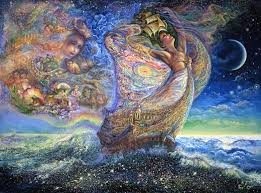 Emilio was there
Looking just like in times gone by.
The same boyish face-
That once made her heart trip;
looked at her in a desolate stare.
Her heart’s door- he closed recently.
His heart’s door – closed long ago when Sofia left.
She followed him just like old times.
He never stopped.
She pursued.
He deflected.
Sofia prayed.

Emilio ran.
She called.
He never answered.
Sofia hope against all hope for them both.
Emilio’s well of hope dried out long ago.
He only tried to survive his own hell.
She wept.
He had no tears.
She wept for them both.
She changed as did he.
Change is good,
It helped them both move on.

Now when she dreams of him she smiles-to have known him only for the blink of an eye was knowing him for a life time. No one could take that away from her-not even that old devil itself called time.